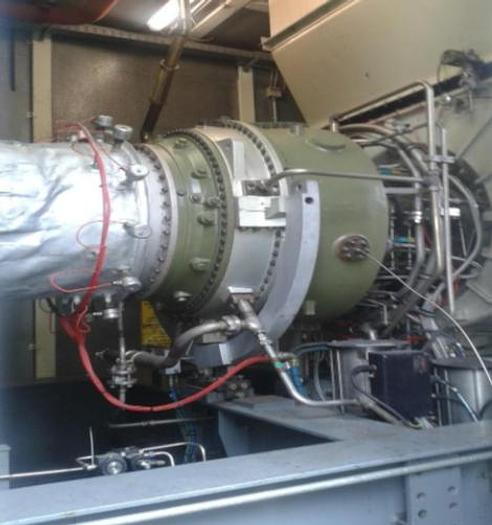 Unit was originally installed in 1995, stopped in 2000, re commissioned by us in 2006 and has been serviced by us until January 2016 when we discovered damage to the HP vanes and client shut down package. Received its last overhaul in 2012 including new Siemens supplied HP single crystal rotor blades. (expected lifetime is 24000 operating hours)

We have installed a 0 hour overhauled set of HP vanes and engine has been rebuilt. No other 'damage' was found during strip of hot section.

This unit was originally installed to supply electricity and heating for a large industrial laundry washing factory. When they stopped, the unit was converted to supply city heating and electricity during the cold months of the year.

Unit was shut down in 2015 and although we quoted repairs, customer decided to shut down the plant. We have purchased the plant and Skyline Turbine Services is the owner of the plant.

In 2010 the package received a new gas train. Please see picture below.

Plant has been demolished, core engine and control system as well as gas train are still available.

Starts up to last overhaul: 654